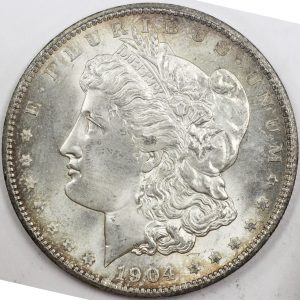 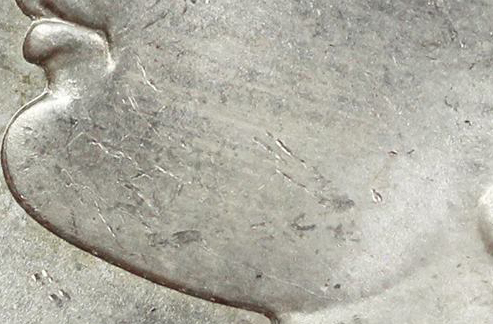 Roller marks are thin parallel lines on a coin’s surface, sometimes they’re extremely obvious. Roller marks occur when the planchet alloy was rolled into sheets, the rollers were not smooth and sometimes would create these marks. The strike was supposed to smooth out these marks but this didn’t occur.

These add no extra value to a coin. 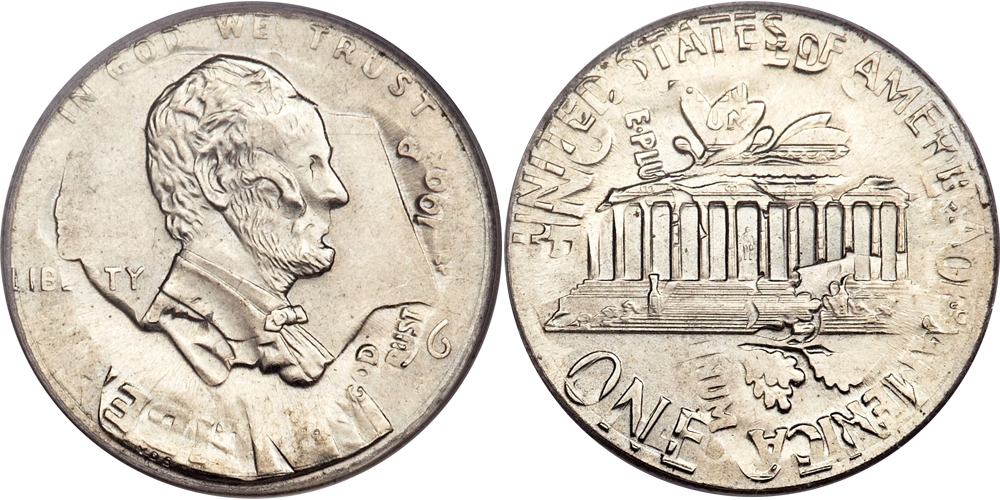 A double denomination is when an already struck coin is struck by dies intended for another denomination. An example is a struck dime over-struck by dies intended for a Lincoln Cent and this example is often pet-named 11 cents.
Values for double denomination errors can vary widely and depends on the dates and denomination as well as what grade is placed on the coin holder. The Roosevelt Dime over Lincoln Memorial Cent in the image above can trade for over $300 and the half dollar struck over a Susan Anthony Dollar can trade for over $22,000.
See What’s Trending At Ebay
Minor & Common Errors

In most instance a coin missing a design element is extremely common and caused by a myriad of circumstances. The most common tend to be struck though grease or a mint employee filed it off when removing die clash marks, burrs or attempting to correct other die issues.

Lincoln Cents are known for these issues and are minted in the billions, so most are just common missing elements. Usually a digit is missing of the date or something is wrong with LIBERTY or the motto, since they’re closest to the rim.

Often there was was an issue with adjusting striking pressure on a cent and the O in ONE might be weakly struck at the top, or a digit is extremely weak or missing on a 1943 steel cent, just to name a couple.

A worn die can cause die cracks, chips and make digits and letters look doubled (Poor Man’s Doubled Die) but these are minor and do not add value ot a coin.

Also design elements closest to the rim are subject to other issues with the die being slightly off center causing the L to be further up on the rim, or the die sliding created strike doubling, or die wear that can mimic doubling. So it’s always important to first think of your coin as not a mint error until you learn the coin minting process.

The above nickel a commonly found example and doesn’t have much premium for most mint error collectors.

Another reason for issues found on coins is damage from a counter wheel and usually this damage creates parallel lines or parallel lines in a crescent shape on the coin. All of these are post mint damage PMD.

Another coin commonly found is a dryer coin and these coins were tumbled in the dryer process and will have smashed features that make them look thicker or wider than usual.

It is damage and not a mint error. No extra value added. 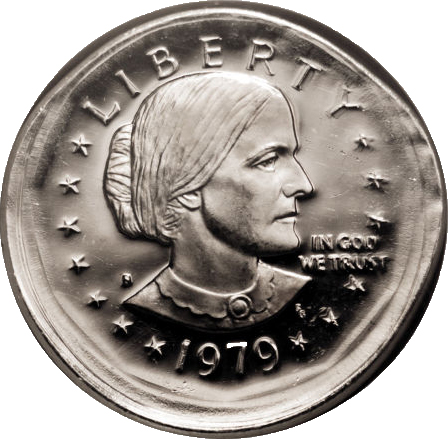 When a planchet it struck out of collar, the above example is centers and the planchet metal spread out in all directions; not all broad strikes are centered.
Broadstrike errors are worth anywhere from $25 for a cent and $145 for a Susan B Anthony Dollar and many will have partial brockage strikes as well. It would have to be an old type silver or gold coin to be worth north of $1,000 and there’s a few examples that have exceeded $2,500. However, modern examples rarely trade for over $100. 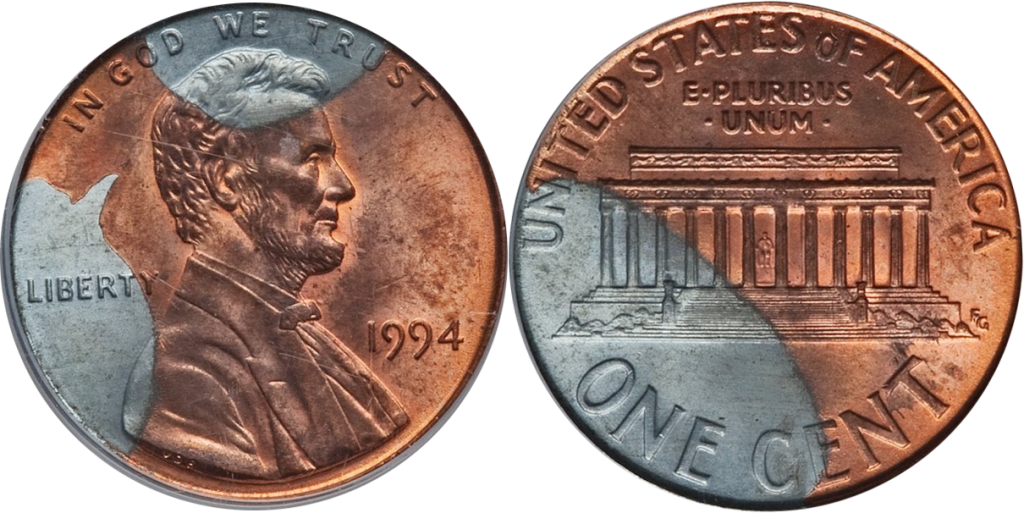 Partially plating issues could be caused by a failure of the copper plating from adhering and then falling off or some other manufacturing error. Unplated planchets somehow missed the plating process, but this effect can also be achieved with certain science experiments; so a closer examination or taking it to an expert is in order.

A couple of things to remember is the coin without plating or missing partial plating was struck when the plating was missing and the surface should be relatively smooth. If it is porous or too grainy then the plating might have been artificially removed. 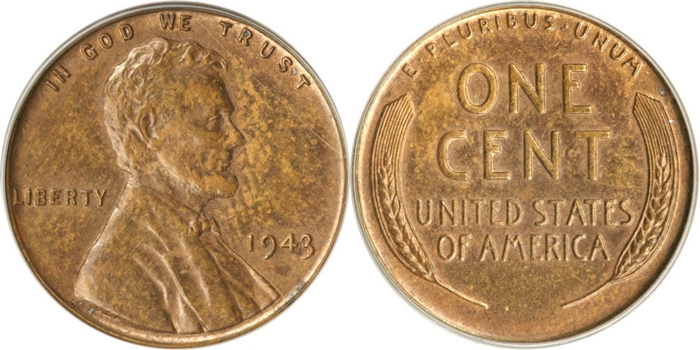 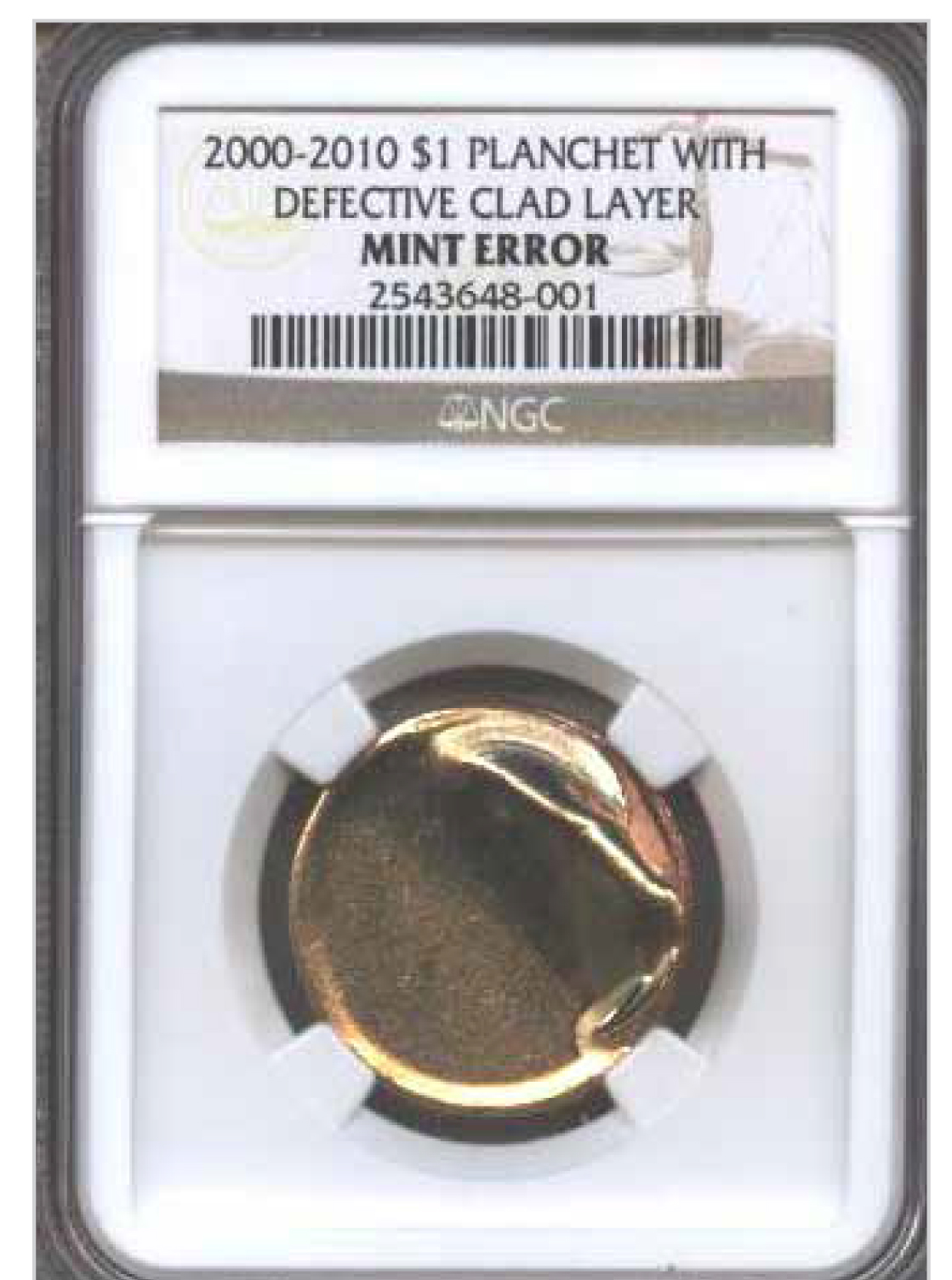 This is a relatively new US Mint Error discovery as reported by minterrornews.com in 2010 and certified and attributed by NGC Numismatic Guarantee Corporation. Minterrornews.com reported that it was found in a US Mint bag for Presidential Dollars and some how the burnishing ball, used to burnish planchets, got trapped inside the clad layer.
More images of the mint error can be found here minterrornews.com 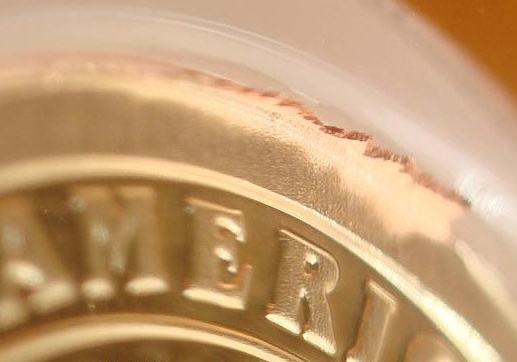 A planchet can obtain extra metal during the annealing process when there’s left over metal debris from the annealing of other planchets. The alloy debris will collect and form a flan along the edge of the planchet and sometimes this can be struck by the die and “folded” or embedded into the coin’s rim, but will still be above the normal surface of the coin.
Ads by eBay – Certified Mint Errors – Silver Dollars – Silver Half Dollars – Silver Eagles – Gold Eagles 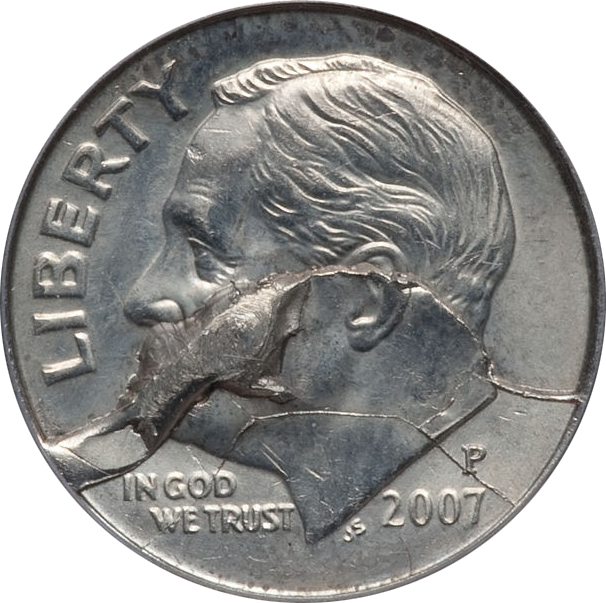 A shattered die is a die that has extensive cracks and is still being used to strike coins; even though it is in a terminal stage and state. The breaks and cracks show up on the coin as raised areas were the planchet metal tries to fill in the voids in the die face.